Can Your PC Start Up Faster?

Age related slow down is a myth

When A PC Starts Up…

… a major part of its sequence of actions is to load programs and services that are configured to open with the Windows operating system. Once these startup tasks finish loading, the PC is ready to use.

Some of these applications and services in Windows startup perform necessary and critical functions, but others are not needed by the operating system and may not be desired by users. This happens because Windows startup can include:

Many users have reported frustration with increasingly longer startup times—the longer they have had their PCs, the longer the PCs take to start. iolo Labs undertook a study designed to measure whether startup time lengthens over a period of time and, if so, what factors may contribute to this impact.

The study was designed to measure changes over time by observing machines ranging from a brand‐new PC to one that was in use for two years (reported as the average lifetime of a computer).

For testing, simulations were developed based on observation of real PCs obtained from real users. Both physical machines and PC snapshots were obtained to develop computer models of the average state of PCs at specific ages (or “machine states”), ranging from a new machine to one that is twenty‐four months old. The study defines each of the machine states as follows:

All the simulations were:

Experimenters observed and measured the following:

Windows startup time is the length of time it takes for a PC to completely start up. Startup time was measured from when the PC is powered on to when the CPU reaches its minimum average idle state (when the average deviation in CPU usage percentage has stabilized). iolo Labs used a proprietary formula to capture when this usage percentage has stabilized. 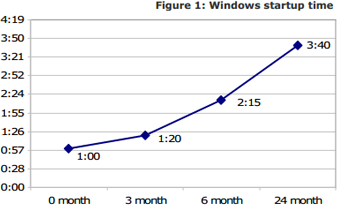 1 illustrates the rise in startup time, from one minute to 3 minutes, 40 seconds – a 267% increase

Startup tasks are the programs and services that Windows loads at boot‐time. Unnecessary startup tasks are those identified in the iolo Labs tune‐up database as automatically opening programs that are not essential to the normal operation of the PC. The purpose of these “unnecessary” tasks is typically to provide quick access to programs that are not usually needed at startup. 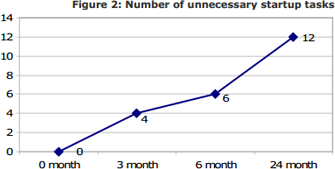 As shown in Figure 2, after 24 months, the number of unnecessary startup items grew from 0 to 12.

CPU usage is the amount of time the CPU spends processing user applications and high‐level Windows functions. The startup impact on CPU usage is measured by the percentage of increased CPU usage caused by unnecessary programs that are begin loading after the Windows shell is in memory, until the time all of these programs have finished loading. 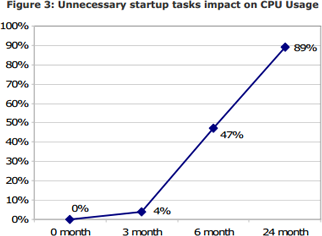 Figure 3 shows the portion of CPU utilization consumed by unnecessary startup tasks. At 24 months, the majority ‐ 89% ‐ of the CPU usage is due to the impact of unneeded startup tasks.

The universal complaint from computer users that startup times increase as a computer ages are verified by these findings. Over a two-year period:

Clearly, progressively slower PCs are not the result of “age.” Something can be done about it. By reducing the number of unnecessary startup tasks, the amount of time it takes for Windows startup processing can be reduced and the impact on CPU usage can be significantly reduced.