Collective Intelligence: What it is, why it matters, and how iolo revolutionized it.

This article may reference older System Mechanic® features that have been replaced or enhanced in the current version.

How lab science combined with community experience can help you make your PC faster than ever before.

Every day we’re faced with the dilemma of making new decisions without enough knowledge to know if we’re making the right choices. Which car is the most reliable? Which computer has the features I really need?  Which smartphone is right for me?  Is that new restaurant any good?

Many of us don’t have the time to become experts on everything we face in life, so we instinctively seek a consensus of opinion. Online forums, reviews, articles and editorials are among the most commonly visited sites—but opinions, especially when repeated enough—can become interpreted as fact. Think of the last election and what the opposite party claimed about your candidate. Or a highly rated movie that left you wondering what anybody saw in it.

What’s under the hood of your computer is an exact science of mind boggling complexity and yet it all exists solely to make things simple for you. Although you might be fast on the keyboard and an expert on the applications you use, if your PC develops trouble, you’re faced with issues you may not really know enough about. Where do you go for advice?

Going to the internet for help is a form of “crowd sourcing,” a term that has come to commonly mean to get advice from a consensus of opinion. But researchers at iolo Labs found opinion-based solutions often lacked reliability.

iolo technologies is grounded in the science of computer optimization but is also focused on how to deliver the highest levels of optimization in the simplest and most comprehensive way possible. The research done at iolo Labs showed that while System Mechanic’s patented ActiveCare® technology is highly effective at automatically eliminating the 12 root causes of PC slowdown, those who were able to expertly use the program’s extensive manual tools could boost performance even further.

In order to bring this level of expertise to the everyday user, iolo engineers had to rethink the traditional concept of crowd sourcing. Think of a time when you hesitated to make a decision because it was way over your head. Now think of a time when you acted enthusiastically on a “no-brainer” decision. What was different? Very likely it was experience. Actual experience can provide a comfort zone of knowledge to act confidently.

Guided Recommendations fuses three powerful technologies that give you the ability to make no-brainer decisions to boost PC speeds to levels previously unattainable.

Here’s how it works:

1. iolo Labs provides detailed descriptions about each running program and which ones, if disabled by you, could speed up your PC. These descriptions include what the program is and does so you can determine if you need it running.

2. To give you a better understanding of the effect each program has on your computer, iolo’s proprietary True Impact™ evaluates each program’s far reaching effect on system resources and its ultimate impact on the PC’s performance.

But what about actual experience, the kind that makes you feel your decision is a no-brainer?

3. The third—and newest—technology is Collective Intelligence™ that leverages iolo’s massive System Mechanic user community and distills their program-handling decisions into an easy-to-read summary. You see at a glance how many users disabled or kept running the same programs you have. 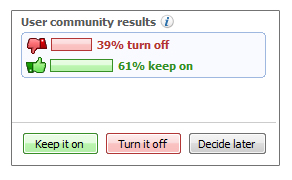 Guided Recommendations makes it easy for you to safely and quickly make what would otherwise be highly qualified decisions. It’s the only optimization technology available that allows the general user and experienced techie alike to quickly boost performance in areas where automatic management cannot go.

Initial lab tests show optimization gains that range from 50%, to even as much as 500%. Even professionals who like to dig in and make manual adjustments appreciate the time they save by using this feature.

Guided Recommendations is pure applied intelligence from both sides of the technology coin: lab science and field experience. As such, it’s an extremely valuable tool when it comes to bringing you PC to even higher levels of speed and reliability.