Computer memory can become just as fragmented as a hard drive, but much faster and with more immediate effects.

We all know computers get slower over weeks, months, and years of use, but have you ever noticed how your PC starts off fast after a fresh restart, but then gets increasingly sluggish the same day, sometimes after only a few minutes of use?

The reason is twofold: memory fragmentation and memory leaks, and System Mechanic has the answer to these annoying idiosyncrasies.

iolo has known for years that within just a few minutes of use, system memory (RAM) can become just as fragmented as a hard drive that has undergone weeks or months of abuse. Just as a fragmented drive causes severe performance decline and even system instability, disjointed memory can have the same effect. Worse, fragmentation of memory isn’t the only thing users must deal with as programs are started, used, closed, and restarted on a busy PC.

This type of normal daily activity exposes systems to what software technicians call “memory leaks“, which occur when a program exclusively reserves memory for itself, but then forgets to release it after it is finished. Memory leaks can confuse the operating system, which is left in a state where it can’t release the previously reserved resources, even though the original program no longer

After the defragmentation process is complete, the amount of memory recovered is shown, and your PC feels immediately more responsive.

Memory Mechanic shows you a real-time picture of the memory defragmentation process as it occurs.

It is common humor among software engineers that all programs have memory leaks, but that they are so small the user never notices. The flaw in this logic is that while perhaps one program’s memory leak may go unnoticed, dozens or hundreds of programs all operating simultaneously can represent a truly devastating effect on performance as they quickly drain the PCs precious resources.

System Mechanic’s Memory Mechanic® is designed to not only reassemble your RAM into neat, contiguous order for significant performance gains, but also hunt down and release all of the resources that are being held captive by memory leaks within sloppy programs. As any computer expert will agree, more memory means faster performance, and Memory Mechanic delivers both.

Now in System Mechanic, Memory Mechanic has been reengineered to work up to 85% faster, and to find and release up to 25% more memory leaks, resulting in even greater performance benefits than before. In addition, iolo Labs has discovered a new and improved technical approach to memory defragmentation that completely eliminates the short pause that users of prior versions experienced while the system rebuilt its memory allocation after the operation was complete.

How to start working with Memory Mechanic

System Mechanic offers a number of ways to start using Memory Mechanic. Here are a few quick ways to get started:

This section displays graphic elements and menus within System Mechanic that have been updated and enhanced in the newer user interface. 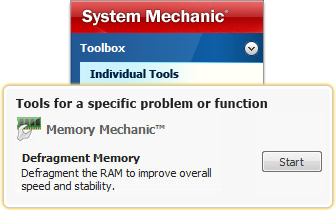 Memory Mechanic will open. Follow the on-screen instructions the begin the process.

This section may reference older System Mechanic® features that have been replaced or enhanced in the current version.

System Mechanic comes with a convenient Desktop Gadget that allows you to access important tools with just a few clicks. If you’re running the System Mechanic Gadget, you can launch the Memory Mechanic directly from your desktop.

The Memory Mechanic tool screen will open as above.