PC Magazine has awarded System Mechanic® their Editors’ Choice award six years and counting. And with the launch of new System Mechanic 16, there is much that’s new to keep writing home about. 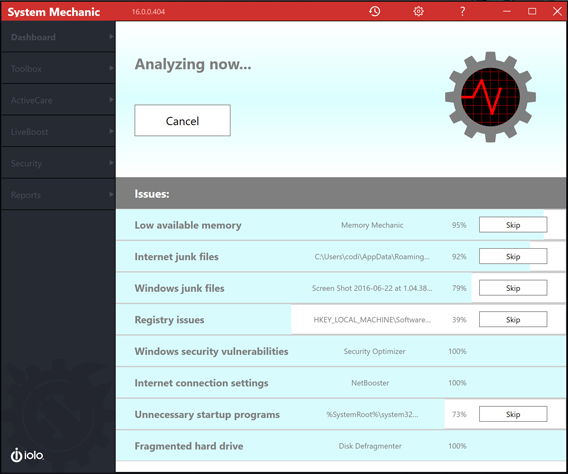 With a revolutionary new product framework designed to fully capitalize on the major advances in the Windows® OS beginning with Windows 7, System Mechanic 16 is the most powerful PC accelerator available today.

In new version 16, dozens of tools and features are now deployed simultaneously to inspect your whole system at once. For example, now System Mechanic searches for trapped memory while also locating junk internet files. This means the scan and repair functions are now many times faster than any release to date.

What’s more, iolo engineers have redesigned, consolidated and simplified the major flagship tools so getting the best performance out of your operating system is easier than ever.

The most intelligent toolset ever designed searches in more places to root out more types of problems. Beyond this advanced error detection, System Mechanic also adjusts dozens of hidden Windows settings, freeing memory, processor and bandwidth to unleash even more system speed.

The new iolo Smart Updater delivers nearly instantaneous updates to ensure you receive the most recent version automatically and seamlessly. Individual components and features can now be updated without a re-release of the entire System Mechanic product. This allows for more frequent product enhancements based upon user feedback.

The next generation of Tune-up Definitions is now capable of continuous, real-time updates that find many effective new optimizations for today’s modern apps. The result is the elimination of many more types of slowdown, especially in Windows 10.

Startup Optimizer features these next-gen Tune-up Definitions that can help to significantly speed up boot time by discovering whole new categories of unneeded startup items while providing more user control over dangerous and unnecessary ones.

With sleek, easy-to-read vector graphics, System Mechanic has been optimized for today’s larger 4k displays. And it leaves the smallest footprint of any version yet, using on average less than 0.5% of processor resources when open and idling, based on the average CPU load after repeated iolo Labs testing on Windows 10 machines.

System Mechanic 16 is specifically designed to fully leverage today’s multicore processors to restore power, stability and speed to Windows computers as quickly and efficiently as possible. As always, the patented technology automatically goes to work whenever your PC is idle, making System Mechanic 16 not just the best but the easiest solution to help you download music, stream movies, surf, shop, work and play online securely, smoothly and faster than ever before.

Windows is a registered trademark of Microsoft Corporation in the United States and other countries.