This is part three in a series describing recent iolo Labs testing to quantify improvements to system performance after optimizing a PC with System Mechanic®.

In previous articles, the results across four different PCs have included nearly 90% average faster boot time and an over 39% average gain in download speed. Here we look at the gains observed in CPU, or processor, power.

The data show that the CPU-tuning tools PowerSense™ and OptiCore™ in System Mechanic can significantly improve processor performance by boosting core clock speed and prioritizing your current tasks in real time.

For separate processor results for each of the PCs, see the chart below. 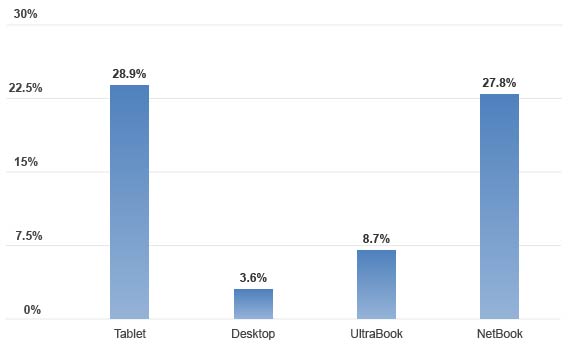 The CPU is one of the most important PC components responsible for smooth, responsive computing. Windows® does not always default to taking full advantage of its capabilities, however, due in part to factory settings generally favoring power conservation over maximum speed.

OptiCore automatically perceives which among your running programs is the current priority task, and allocates system resources accordingly. For its part, PowerSense can override sluggish Windows default settings to unpark idle processor cores and rev them to maximum clock speed when using high-demand apps that require more raw CPU power. The result is a faster PC that smoothly and capably meets today’s complex computing challenges.

Performance metrics were collected during tests run five times before and five times after System Mechanic was installed on each of the four Windows machines, with the scores averaged to deliver results across the following categories:

For detailed specifications on the computers and benchmarking sites used in these tests, please see the full iolo Labs white paper here: http://www.iolo.com/resources/articles/system-mechanic-performance-benchmarking/.